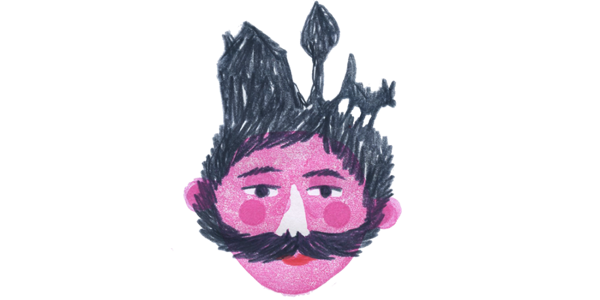 His mustache had to sting pretty badly, because mister Hobson didn’t have a wife and my mother said it was because of the mustache.
In class it was hard to focus on anything else than the small black hairs that stuck out of mister Hobson’s upper lip, like pins from a pincushion. When mister Hobson talked, his mustache jumped up and down and it curled in a funny shape when he laughed. When he screamed the mustache caught the bits of saliva from his mouth. In the morning he gave the mustache coffee to drink and during lunch he fed it the mayonnaise of his sandwiches.
One day the mustache was gone. I noticed it as soon as I entered the class room.
‘Where is your mustache?’ I asked.
‘It didn’t work out. I thought it was my retreating hairline, but everybody says it’s the mustache.’
‘My mom too.’
‘You see.’
‘She also says that without the mustache you’re a very attractive man.’
‘She said that?’
‘A sex god.’
‘A sex god?’
‘She thinks I can’t hear her when she talks to her girlfriends on the telephone, but I can hear everything.’
When I came home from baseball practice that Saturday, mister Hobson sat on the couch next to my mom dunking a chocolate chip cookie in a cup of coffee. His upper lip was slightly whiter that the rest of his face and he couldn’t stop fidgeting it, as if he had forgotten that the mustache was gone. My mom, in her turn was fidgeting her hair and she laughed a high-pitched giggle every time mister Hobson said something.
‘You don’t mind if mister Hobson stays over for dinner, do you?’ my mother asked me and I shrugged my shoulders. She had prepared three courses. Normally we ate take-outs, usually pizza. Sometimes I said: ‘please, no more pizza,’ but then my mother replied: ‘some little boys would kill to have so much pizza.’
‘You don’t mind if mister Hobson stays over, do you?’ my mother asked me when we finally finished dinner. She had red speckles on her lips from the wine. ‘Or he has to drive all the way back to Cleveland.’
So mister Hobson lived in Cleveland. My mother once told me: ‘Cleveland is a depraved city, and not only because your father now lives there with his new wife.’
The next morning I couldn’t take a shower, because my mom and mister Hobson were in it. They took forever and my mother was laughing her high-pitched giggle again.

We got a substitute teacher.
‘Where’s mister Hobson?’ Claire asked. She always asked these annoying questions, about stuff I already knew.
‘I don’t know,’ the sub answered.
‘He’s in the shower at my house,’ I said.
‘Really?’ Clair asked.
‘Really,’ the sub asked.
‘Together with my mom. She says he a sex god.’
All the kids laughed, but the sub didn’t. She said: ‘you shouldn’t talk like that in the classroom.’
A couple of days later we got a different teacher. Miss Keeley.
‘Where’s mister Hobson?’ I asked.
‘Mister Hobson is now teaching eighth grade.’
‘Why?’
‘That’s better,’ Miss Keeley said, ‘for you, and for the others.’
I missed mister Hobson and his mustache. Miss Keeley had hair on her upper lip too, but you couldn’t call it a mustache.
In stead of in class, I saw mister Hobson at the kitchen table now. Usually with a beer, or a glass of wine in his hand. Sometimes his shoes were under the hatrack. He bought new ones with my mom, a pair of those shiny things with a long pointed nose.
‘How would you like it if Tim came and lived with us?’ my mom asked me one night. ‘You only have to say yes if you really want it, otherwise you can say no.’
My mom called him Tim, but I didn’t know any Tim, only a mister Hobson. With a mustache and without pointed shoes.
‘Can I call him mister Hobson if he lives here?’
‘No, at home you’d have to call him Tim, like you called your father ‘daddy’.’
‘Then I don’t want it.’
‘Are you sure?’ my mom asked, ‘you can sleep on it, if you want to?’
She looked at me like she had looked at me when she told me that daddy was going to live somewhere else for a while. Like it was really terrible for me, while she was the one almost crying.
‘I don’t have to sleep on it,’ I said.
She still looked at me, like she expected me to say something else, but I already said everything I wanted to say.
That evening we had pizza. Mister Hobson was not at the table and my mother was sighing with everything she did.
‘Why are you sighing like that?’ I asked.
‘Just eat your pizza.’
After dinner she went straight to her bedroom to talk to her girlfriends on the phone. She hadn’t done that since mister Hobson had appeared on the couch.
‘Sam doesn’t want to,’ I heard her say, ‘but I think that Tim is my soulmate.’
Soulmate. I hadn’t heard that word before. It sounded a little bit like a toy. Did my mom think of mister Hobson as a toy?
‘I missed you,’ mister Hobson said when he entered our classroom, but it didn’t sound like he meant it. More like he had prepared it in front of the mirror. He still didn’t have a mustache and wore the same pointy shoes. When he drank coffee, he licked the spilled drops of his bare upper lip and he just ate the mayonnaise of his sandwiches. When I raised my finger he pretended he suddenly saw a rare bird or a hot air balloon outside the window, even when there wasn’t a rare bird or a hot air balloon in sight.
During lunch break he sat in the schoolyard and ate a ham sandwich. He pretended he was absorbed in the newspaper when I walked up to him.
‘It’s nice you’re back,’ I said.
He raised his head.
‘I understand,’ he said, without explaining what he understood.
‘My mother misses you,’ I said. ‘She says you might be her soulmate.’
‘I miss her too.’
‘What does that mean, soulmate?’
Mister Hobson chewed on his ham sandwich.
‘It means,’ he said and swallowed, ‘that you’re made for each other.’
When I came home my mother was on the couch with a bottle of wine. The curtains were drawn, and the tv was on. It looked like she had been sitting there the whole day.
‘Mister Hobson is back, but he isn’t mister Hobson anymore,’ I said.
My mother smiled at me. Her teeth were stained by the red wine.
‘Give it some time,’ she said.
‘He says he misses you.’
I sat next to her and we watched two people who had to carry a huge wedding cake across a floating raft in a swimming pool. I hoped they would fall in the water, they almost did, but in the end they made it across. After that, my mother zapped to a man with silver gray hair that kissed a blonde woman in a red dress. I walked over to the tv and turned the volume down.
‘I was watching that,’ my mom said.
‘Is mister Hobson your soulmate?’
‘I don’t want to talk about that.’
‘Mister Hobson says …’
‘I don’t want to talk about mister Hobson.’
‘But I just wanted to say that if mister Hobson is your soulmate, it’s okay if he comes and lives with us.’
My mother was quiet. On tv, the man with the silver gray hair and the woman in the red dress were in bed smoking a cigarette.
‘Are you sure about that?’
I nodded.
She came off the couch, wobbled towards me and hugged me. Then she began to cry.

A few days later mister Hobson was back at our kitchen table. My mother had partly succeeded in baking a cake.
‘This is the best cake I’ve ever had,’ mister Hobson said.
‘Don’t exaggerate,’ my mother said.
I was quiet and looked at mister Hobson’s upper lip. Small black hairs were sticking out. It wasn’t a mustache yet, but it wouldn’t be long.